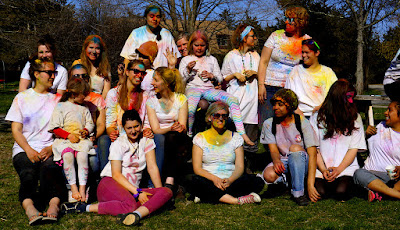 On April 16th, Triform celebrated Holi, the Indian Festival of Colors, to welcome the spring with full gusto. There were snacks, games, laughter and of course, a lot of colors. The event was planned in two parts: an afternoon with games, colors and snacks; and an evening with an Indian classical music concert by Neel Murgai and Brooklyn Raga Massive and Ray Spiegel. 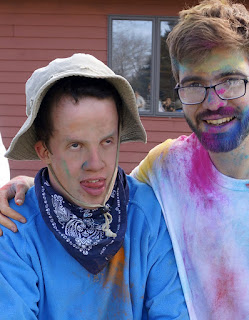 Afternoon:
Everyone started to gather at 2:45 pm. Each of the Triform house's were assigned a color and brought snacks of the same color. We created a play area as well as a safe area for people who just wanted to watch.

The play area was made up with picnic benches arranged in a circle. The benches were assigned a certain color and house. After saying hello to each other with colors we got started with the games. We played the games 'Under the Tower', 'Stop Song' and 'Color, Color Goose'! The games were taken from the classic games and adapted for the color play. There was a white sheet with "Holi" written in rainbow colors to provide the background. The kids were equally at ease at play as any of the elders.

Evening:
Guests started to arrive for the concert at 7:00pm. Friends from Camphill Village in Copake came to watch the concert and take part in the celebrations. At the entrance to Falcon Hall there was a fire pit. Each house sent one object that they did not need anymore. It was offered to "Agni" the fire god, as symbolic gesture for purification, freeing ourselves from things we do not need anymore. (spring cleaning!) 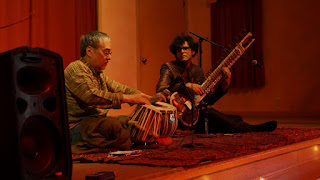 Once the Hall was full, Aroon gave a small introduction and the musicians appeared, diving straight into the ragas. At intermission we offered Indian Masala tea and the audience mingled with the musicians. Neel and Ray took this opportunity to explain the instruments, Table and Sitar, to the audience. They are both accomplished musicians and music teachers with many years of experience performing Indian classical music live, in theaters and films. They introduced the basic concepts of Indian classical music and the instruments they were playing. The audience was mesmerized with these incredible ragas.

The event was organized by a group of seven co-workers and it took weeks of careful planning and organizing to make this event happen. We could not have done it without you all. Thank you to everyone who helped with the planning.

For more photos from the Holi Festival visit our Facebook page.

Popular posts from this blog

The Healing Aspects of Crafts in Our Times by Lisa Damian

By Heath Iverson December 04, 2017
The Healing Aspects of Crafts in Our Times was the theme of this year’s Camphill Craft Conference, held at Triform. The conference opened with a tour of Triform’s craft work areas, a hearty dinner, a performance by the Triform Bell Choir and a keynote address by Stephen Steen. Participants braved blustery weather to tour the work areas at Camphill Copake on Friday. There we were hosted for dinner by various houses and enjoyed a lovely and moving performance of Complementary Eloquence by Gili Lev, John McManus and Inbal Segev. On Saturday we toured work areas in Hudson, visiting Solaris, Drop Forge and Tool and Inky Editions.
We also got our hands dirty. Panel leaders provided rich experiences in paper marbling, lino printing, indigo dyeing, ceramics, felt and dried flower wreath making.
Four main themes emerged and were aptly woven into a fabric of deeper understanding. Stephen Steen laid down the warp as he articulated the esoteric aspects that underlie the human being’s relations…
Post a Comment
Read more

Celebrating Candlemas as an Agricultural Festival

By Unknown February 08, 2017
An article by Ben Davis for Stella Natura

Calendar of the Soul verse for the 44th week: Reaching for new stirrings of the senses, Mindful of Spirit Birth achieved, Clarity of soul imbues Bewildering, sprouting growth of worlds With my thinking’s creator will.

A Visit to Triform's Dairy

By Heath Iverson August 24, 2017
It’s just before 6 AM and the day at Triform has already begun. This morning I’m with householder Max vom Stein, his daughter, Lily, and co-worker, Lena, as they start the daily routine of caring for and milking Triform’s cows. These beautiful animals are a big part of the farm and Max was kind enough to give me a tour of the dairy operation to let me get sense of just how these cows fit into the bigger picture of the community.
While we talk, Max is busy herding heifer calves born this spring to nurse with their mothers.He explains that Triform’s herd is a mixed one, combing a variety of breeds, including Jersey, Devon, and Swiss Brown cows. Once the calves are seen to, we move on to milking. I learn right away that Triform’s cows are more than just livestock; each has their own name and distinct personality. Lily introduces me to Stormy, a very sweet Holstein that I’m told is one of the cows most beloved by the community.As we settle in to milk, slowly filling our pales, Max elaborat…
Post a Comment
Read more